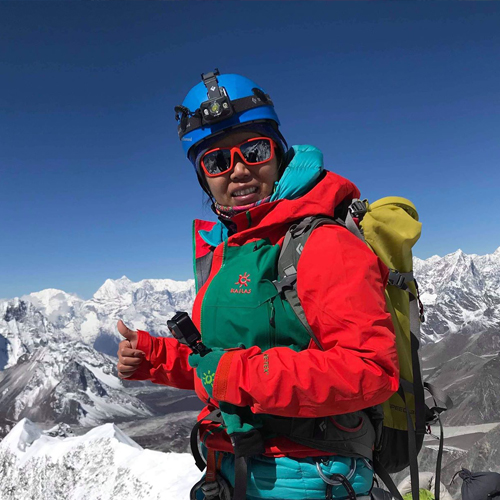 After all, this climbing experiences, she decided to set a flat form and space for the newcomer and serve to the people. she established a company called Out ware Treks & Expedition. She works in her own company as a Managing Director cum Expedition leader and her main objective of establishment of this company is to teach safety climbing. She believes that there are several people who are dreaming of climbing like Mt. Everest, K2, Manaslu and many other mountains like her before. So now she wants to make it happen and make their dream come true. She is ready to help the people for climbing from the basic training in Kathmandu to top of the world (Mt. Everest).

She was born in Okaldunga district of eastern Nepal on 6th March 1978. She is one of the dedicated women mountaineers in Nepal. She feels blessed on her glory of mountain climbing. She never felt that women are weaker than man. She proved herself as a highly qualified climber in the world by having several climbing records on her name. She dares to lead the Mt. K2 and made history of summit success which never happened before in the climbing history.

Mountaineering is not only her profession but also love and passion of her for the mountains.

She is considered as one of the qualified, dedicated, sincere and responsible woman expedition Leader of Nepal. She has got a higher qualification degree with the management skills. She is also government license holder trekking guide and qualified Liaison Officer.

She has got basic and advance mountaineering training and woman leadership training from the reputed institution of Nepal Mountaineering. Along with all these kinds of experiences, she would like to welcome to all those adventure lovers to join with her for any kinds of activities like trekking, peak climbing and for 8000m expeditions. She assures the safety and security of all those adventure lovers along with the quality service. She believes in quality service, not in quantity. She has contributed a lot to the social sector as well. She is an inspiration for all those women who dreamed and make possible.  She believes women are the backbone of the society, women can bring prosperity in society.