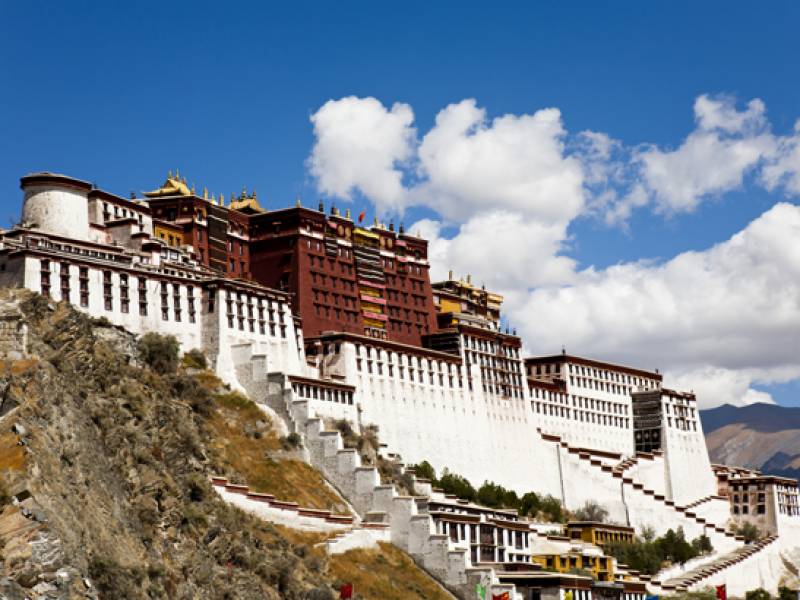 Tibet Information Introduction
The Tibet Autonomous Region (TAR) is an important part of the People’s Republic of China. The name of Tibet evokes feelings of awe and mystery. Tibet has now been the much sought-after destination with its mystic, mysterious land of ancient Buddhist culture, awesome landscapes, artistic monasteries and centuries-old caravan trails. Lying on a plateau at an average elevation of 4,000 metres above sea level, the TAR is often known as the Roof of the World. With a population of 2.3 million, Tibet covers an area of 1.2 million square kilometres. The region is surrounded by the Kunlun mountains to the north and the Himalayas to the south. Lhasa is the capital city of Tibet. Situated at a height of 3,700 metres above sea level, the cultural city has a recorded history of more than 1,300 years. Constructed in 1645 A.D. on the top of a hill, the impressive Potala Palace is a centre of attraction of the city. The former seat of the Dalai Lamas has 1,000 rooms, 10,000 shrines and 200,000 religious statues. The old Lhasa city revolves around the Jokhang Temple and the quaint Barkhor market that surrounds it. Built in the 7th century, the Jhokhang is considered Tibet’s holiest Buddhist shrine. Its mural paintings, finely worked golden roofs and other works of art lure one’s eyes. Within a short distance from the old city core lies a modern capital of concrete high-rises, fancy department stores and wide boulevards. Norbulingka consists of wooded greenery and three palaces once used by the Dalai Lamas as a summer retreat. The Drepung Monastery lies about 10 kilometres from the city. Built in 1416, it is the largest in Tibet. The Sera Monastery, which is about 5 kilometres to the north of Lhasa, is another important centre of Buddhist learning. It lies amidst serene surroundings. Tibet may be one of very few lands on earth capturing man’s imagination. Nomads have been remaining much the same as they did one hundred years ago. The nomads still subsist from their yak herds. The Tibetan people and their religion are inseparable. Even in their earliest myths, one finds references to Tibetan religious beliefs. The Bon religion dominated Tibet in the past. Gradually, after the introduction of Buddhist statues and later Sanskrit documents from India, Buddhism crept increasingly into Tibetan culture. Tibetan Buddhism is the culmination of some early Bon beliefs, Indian Buddhist texts and several great lamas. Buddhism and politics had been flourished in Tibet since King Tsrongsang Gampo got married with the then Nepali princess, Bhrikuti A visit to Tibet is an astonishing experience. The traveling to Tibet is difficult and unpredictable. The infrastructure is poor to non-existent. The Qinghai-Tibet Plateau, in the southwest of China, has held high the image and reputation of Tibet being “the Roof of the World”. The majestic Tibetan highland stands on top of the world and its unique cultural tradition has owned an international fame. The great Himalayas lie in its south with the towering Mt. Qomolongma standing above all world’s peaks.

History
In the ancient days, Tibet was a boundless sea. It is said that a large piece of continental plate on orogenic-movement drifting from the south met together with the European plate and a large stretch of highland was uplifted on the earth. The region with a high altitude and cold weather today had once been an area with a warm, humid climate of subtropical zone of grassland with low altitude which provided a profitable condition for ancient people to live and multiply in this land. Various researches show that the earlier cultural remains where mainly distributed in the east and middle part of the Qinghai-Tibet plateau. Before the 7th century, there were many tribes in Tibet. However, wars broke out as the tribes like- Tubo made their attempts to scramble for their domains. The earliest capital city of Tubo was in today’s Nedong County in Lhoka. After Namri Songtsen, the thirty-second generation of Tubo prince inherited the power, consolidated and developed the Tubo’s territory. Later, in order to refrain from the interior opposite influence between the tribes, Namri Songtsen moved the national capital from Nedong to Gyama area, presented Medro Gonkar County, and built the Gyama palace. In the early 7th century, Songtsan Gampo, the son of Namri Songtsen, inherited the power and completed his father’s cause and realized the unification of the Tibet plateau and set up the central slave regime-the Tubo Kingdom. In order to consolidate the newly emerging power, Songtsen Gampo adopted a series of important measures. For instance, in the year 633, he moved the capital of Tubo Kingdom to Lhasa, built the Potala palace on the summit of the Red Hill and rebuilt the road and some other houses around the Potala palace. Gradually, Lhasa had become Tubo’s economic, political and cultural center. He was married with the princes Bhrikuti Devi of Nepal and ruled the country sagaciously. Unfortunately, due to his illness, he left this earth forever. No doubt, this brave king is remembered and will be remembered by the Tibetan people with pride even in the days to come.

Custom
Tibet is rich in its custom and culture. Presenting hada is a common practice among the Tibetan people to express their best wishes on various occasions, such as wedding ceremonies, festivals, visiting the elders and the betters, and entertaining guests. The white hada, a long narrow scarf made of silk, embodies purity and good fortune.
It is common when you come to a Tibetan family, the host will propose a toast, usually barley wine. You should sip three times and then drink up. To entertain guests with tea is a daily decorum. The guest is not to drink until the host presents the tea. Similarly, one should not forget to say “la”after saying “hello” to the Tibetan people to show respect. It is recommended not to make any sound while eating and drinking. Sky burial is another custom in Tibet. There are many prohibitions in Sky burial. Strangers are not allowed to attend the ceremony. Visitors should respect this custom and keep away from such occasions. Also known as the Lamaism, the Tibetan Buddhism was introduced to Tibet from the mainland and India in the seventh century. The Tibetan Buddhism consists of four major sects, the Ge-lug-pa (Yellow) Sect, the Nying-ma-pa (Red) Sec, the Saturday-kya-pa (Variegated) Sect, and the Ka-gyu-pa (White) Sect. The immediate motivations of pilgrimage are varied, but for the ordinary Tibetan it amounts to a means of accumulating merit or good luck. The lay practitioner might go on pilgrimage in the hope of winning a better rebirth, cure an illness, and end a spate of bad luck or simply because of a vow to take a pilgrimage if a bodhisattva granted a wish. In Tibet there are countless sacred destinations, ranging from lakes and mountains to monasteries and caves that once served as meditation. Specific pilgrimages are often prescribed for specific ills; certain mountains for example expiate certain sins. A circumambulation of Mt. Kailash offers the possibility of liberation within three lifetimes, while a circuit of Lake Manasarovar can result in spontaneous Buddha hood.

Geography
Tibet Autonomous Region situated in the west of China occupying one-eighth of the national total area. It is the second largest area in China. It is adjoined with Xinjiang and Qinghai to the north, Sichuan to the east, and Yunnan to the southeast. It shares its borders with India, Nepal, Burma, Sikkim and Bhutan to the south and Kashmir to the southwest. Lhasa is not only the capital of Tibet, but the first largest city in Tibet. So, this region is known as “the roof of the world”. It is said that there was an ancient sea. The geologists call it “the ancient sea of Turish”. The landforms and historical remains can still be found in Tibet. The topography of Tibet is divided into three different natural parts: the northern Tibet Plateau, the Nyanqin Tangula ranges and the river valleys. The Himalayas to the south of the Tibetan Plateau is the youngest and highest range on earth, which consist of a series of parallel ranges running from south to north. Its main part is at the juncture of three countries: China, Nepal and India. Some of the notable rivers of Tibet are the Yangtze, the Gyalmo Ngulchu, the Zachu, and the Yarlung Tsangpo. There are also more than 1500 lakes in the plateau of Tibet.

Festivals
This beautiful peace of heaven is a land of feasts and festivals. It seems as if every morning begins with festival. The highlanders are very fond of celebrating festivals.